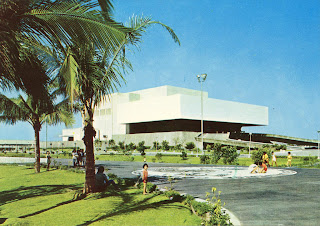 PASINAYA 2008 - CCP OPEN HOUSE!
With more than thirty (30) shows in various venues of the Cultural Center of the Philippines, this whole day event has activities for everyone. Featuring sneak previews of productions of the CCP Resident Companies like: Ballet Philippines, Bayanihan Philippine National Folk Dance Company, NAMCYA, Philippine Ballet Theatre, Philippine Madrigal Singers, Philippine Philharmonic Orchestra, the Ramon Obusan Folkloric Group, Tanghalang Pilipino, and the UST Symphony Orchestra, and many other guest artists. Definitely a great Sunday thing to do.

This year's highlights include an indoor fair, performing arts, market, and street parade.

And here's an update on the "LIVING LA VIDA IMELDA" tour. In lieu of the now shuttered Coconut Palace, the second act of the tour will now be done in the Philippine International Convention Center (below). As I was developing this tour, the PICC was actually my first choice because of it's stunning lobby and dramatic layout, but I dropped it because they were closed for refurbishment. I am pleased to say that the refurbishment has been completed and the bar has been raised over at the PICC. It looks as perfect as it did back when it opened in 1977 as Asia's first convention center. Thank you Butch Garcia of PICC marketing for being so open to having tours at the PICC. And thank you Jed Yabut and edgarjlaw for the pictures. WHEE! WHEE! WHEE!
Thanks a million to Floyd Whaley of Travel + Leisure for the wonderful feature on my CCP Imelda Tour (below). Thank you thank you thank you. So nice to see Manila finally featured in T+L (even if it was me). I hope you find more interesting and hip stuff to see around this underrated city that I love. And for all you out there, go grab Travel + Leisure Southeast Asia. It's a cool, hip, travel magazine that focuses on SEA regional tourism for the amazingly reasonable price of Php250.00 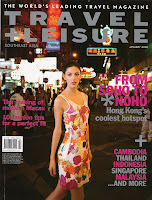 And a shout out to Tessa Prieto Valdez for the great article in the Inquirer as well. Thank you. Thank you. Read that article here.

And thank you to Mike Aquino for the cool recommendation in About.com. Check that one out here.
Posted by carlosceldran at 11:28 AM 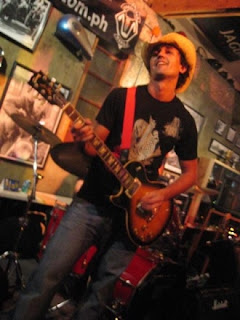 First of all, Bruce Northam's article on the Rock and Roll scene of the Philippines (Photo above of Cowboy Santos with the Blue Rats) and a profile on Journey's new Pinoy frontman, Arnel Pineda, has just been released in the lifestyle section of Gibson Guitar Magazine's website. Read about it HERE and HERE. Secondly, Thank you Dr. Hugo Schwyzer for the nice words about my tour - and more power to you and your advocacies. Read that HERE. And finally, thank you Isa Lorenzo of Silverlens for the lovely mention in the Manila Bulletin article HERE.
Posted by carlosceldran at 11:26 AM

Email ThisBlogThis!Share to TwitterShare to FacebookShare to Pinterest
Labels: read this 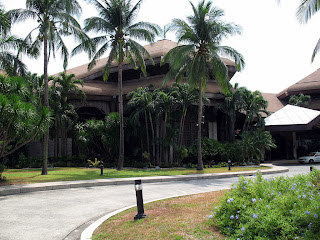 Without much fanfare and much to my dismay, the Coconut Palace has closed for good. For now.

Last week my "Living La Vida Imelda Tour was unceremoniously re-directed because the Coconut Palace has suddenly switched hands from the Department of Tourism to its "rightful owner", the Government Service Insurance System (GSIS). Therefore, the place was shut down for fifteen days for "inventory" without any directive to open it's doors to the public thereafter. And so, without any announcement and consideration for all the printed guidebooks, organized tour operations, and tourists, downtown Manila was suddenly deprived of another world class tourist attraction. And according to the grapevine, the last event to be held there will be on February 8 and there is talk of it becoming a casino. Like - as if Manila needs another one?

Although I would rather have see the Palace converted into "The Museum of Philippine Design", a showcase of contemporary Philippine fashion, accessories, handicrafts and housewares (with rotating exhibitions/workshops curated/managed by CITEM and the Philippine Design Center), I really wouldn't mind it being converted back into the simple banquet hall that it once was. 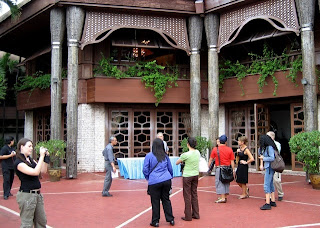 Ahem. Paging Winston Garcia of the GSIS: What are your plans for the damned thing? Will the GSIS ever open The Coconut Palace to the public again? Or will the GSIS just let it sit there, gain dust and rot in the sun and sea air? Because judging by the crappy GSIS track record for investments and the condition of other architectural masterpieces in its possession (the rotting Metropolitan Theater) and the decaying former GSIS headquarters near Arroceros Park, I can only look forward to years of neglect for The Coconut Palace.

Dang. And just when I kept pushing the Coconut Palace as a tourist attraction and pushed for its being included as a significant place of interest for tourists. What wasted effort.

Thank you My Soul Insurance and Senor Enrique for the photos of the Coconut Palace.
Posted by carlosceldran at 9:15 AM 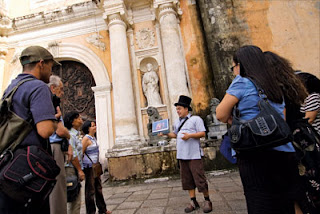 SMILE! SMILE! SMILE!
A shout out to Irwin Cruz of Smile, the magazine of Cebu Pacific, one of the smartest inflight magazines that I've seen around. And although there was a wee mistake (I wasn't the director of the Heritage Conservation Society, I was just the assistant to the director), I'm really grateful that Irwin really "got" my objectives. He figured out that my tours really aren't just "tours" at all, but something more personal and political for me; that these tours matter more to me than just "promoting" tourism and putting money in the hat.
Many thanks, man.
Read the article along with features on both Ilac Diaz and Gang Badoy here. 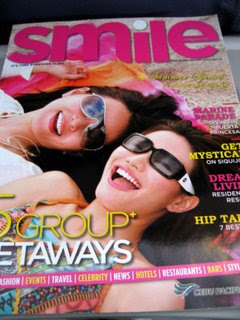 Posted by carlosceldran at 11:04 AM