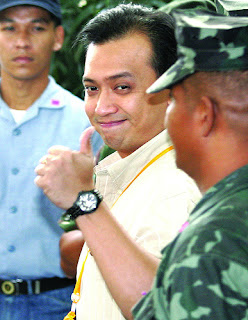 I HATE TRILLANES. I hate what he did - and to all the idiots who voted for this crybaby, I hate you too.
He and his supporters (and stupid freaks who voluntarily acted as shields for these morons) should have been totally blown away by the tanks and made it worth the destruction of my favorite hotel's gorgeous renovations.  I know I might sound extremely callous.  But do these people realize how difficult it is to build a country?  Their actions were obviously self serving. And in the end, it's poor people like me and you and all the employees of the Pen who get stuck with having to rebuild our country's image after all their whining and irresponsibility has cleared.
Here we go again. Three steps back for the country. And now that Trillanes and his merry medley of melodramatic morons are still alive and walking away unscathed, make that fricking four.  Sometimes, I think we are too nice.  These guys make me miss martial law.
Sigh.  I don't normally wish ill upon anyone. But really,  Trillanes' drama was uncalled for and the government acted accordingly.  C'mon guys! The election is in two years, just wait till then if you want Gloria out!  Sigh. I truly wish that the government finally pulls through with the "eradication" of these military and civilian troublemakers though (if not through "extreme" means then by locking them away and really throwing away the key).  Let it be known that I do not support the motives and methods of Trillanes, Guingona, Labayen, Reyes, et al.  And considering that NOBODY went to the Peninsula to support them except for Bibeth Orteza, I'm pretty sure A LOT of Filipinos agree with me too.
Gee.  I can't wait for all of my tour cancellations to start flooding in.  And poor Pen, they were at 90% capacity, had to cancel a wedding, and now have to work overtime to restore their lobby and reputation.
Posted by carlosceldran at 5:30 PM

Astad Deboo brings new dimension to the ever ubiquitous dynamics of innovation and tradition in dance. Venturing into the less-trodden path of modern dance in India, Astad has bravely sought a variety of dance traditions, styles, technique and knowledge, combing through world cultures while fruitfully combining them with his own tradition and experiences. Born in 1947 in Navsari, Gujarat, Astad Deboo initially received training in Kathak under Guru Prahlad Das in Calcutta and in Kathakali under Guru E K Panicker. He later attended the London School of Contemporary dance learning Martha Graham's modern dance technique and Jose Limon's in New York. Along with these and other experiences with dance companies in Japan and Indonesia, he has created a dance theatre style of his own which successfully assimilates Indian and western techniques.

Now in Manila for the Asian Performing Arts Festival, Astad Deboo shall be giving a performance/artist presentation at Green Papaya Art Projects on Wednesday, November 28, 8 PM. He will also talk about his process and share his artistic process the next day, November 29, 2:30PM with a lecture-demonstration at UP College of Music Mini Hall. A dance workshop follows thereafter at 4PM. 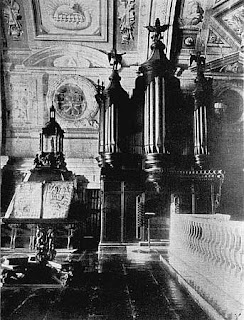 THE SAN AGUSTIN INTERNATIONAL MUSIC FESTIVAL
The 9th San Agustin International Music Festival, the premiere musical and cultural event in Intramuros, unreels on November 28 to 30 at the San Agustin Church with a powerhouse assemblage of the finest musicians both from here and abroad. This year’s festival has a special musical relevance since we commemorate the 10th Anniversary of the restoration of the 18th Century Pipe Organ of San Agustin Church, a National Cultural Landmark. Featured artists are Spanish organist Miquel González, Filipino bassoonist Adolfo Mendoza, the world-renowned Philippine Madrigal Singers, the Hail Mary the Queen Children’s Choir, the Union Church Chancel Choir and the Manila Philharmonic Brass Ensemble.

González, the Badalona-Barcelona organist is a winner of the prestigious Prix Ruiz-Morales in the Música en Compostela tilt and the Joventuts Musicals d’ Espanya national competition held at the Girona Cathedral. Mendoza, principal bassoonist of the Philippine Philharmonic Orchestra (PPO) and faculty member of the University of Santo Tomas Conservatory of Music, has performed in key cities around the world as part of the Asian Youth Orchestra. Organist González teams up with bassoonist Mendoza to perform compositions of Vivaldi, Elgar, Devienne and Spohr, among others. The Philippine Madrigal Singers under choirmaster, Mark Anthony Carpio, is the only group to win the coveted European Choral Grand Prix twice, the latest of which was held in Arezzo, Italy last August.

On November 28, Miquel González, will interpret baroque pieces of Anselm Viola(1738-1798) and Charles Baguer (1768-1808) and together with the bassoonist, Adolfo Mendoza, the Concerto in D Minor by Antonio Vivaldi. The Philippine Madrigal Singers will render, among others, the Pater Noster, Christmas Spiritual Medley and Mga Awit ng Pasko. On November 29, organist González and bassoonist Mendoza will be followed by the Hail Mary the Queen Children’s Choir under conductor Theresa Vizconde-Roldan as they render the pieces like Living a Holy City, Salve Regina, Halina’t Umawit. On November 30, after the performance of the organist and the bassoonist, the Union Church Chancel Choir and the Manila Philharmonic Brass Ensemble under the direction of Eudenice Palaruan will close the three-day festival with the performance of John Rutter’s Gloria to welcome the Yuletide Season. They will be joined by a composite choir from various church choirs. 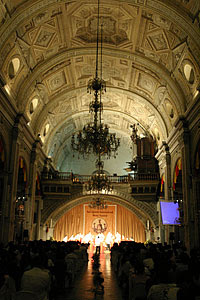 The festival is organized by the Director of San Agustin Museum in cooperation with the Embassy of Spain, Agencia Española de Cooperación Internacional, Instituto Cervantes, National Commission for Culture and the Arts, Cultural Center of the Philippines and DZFE 98.7. Concerts start at 8:00 p.m. For details, contact 526-6793 to 94 or 527-4060 to 61.
Posted by carlosceldran at 7:45 AM 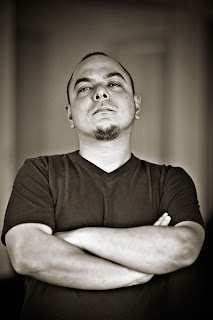 YO! YO! YAHOO!
So what the hell you still doing here?  Why haven't you logged onto Yahoo Answers and replied to my question yet?  Huh?  Huh?  Don't waste my fricking time.
How was that for my impression of being a thug.  Thanks Juan for the very impressive portrait that makes me look neither flamboyant nor fat.
So yeah, check out the site.  It's a really fun service by yahoo that acts as a search engine but with real people giving you the answers.
Mood: butch.
Posted by carlosceldran at 10:18 AM

Email ThisBlogThis!Share to TwitterShare to FacebookShare to Pinterest
Labels: yo yo yo 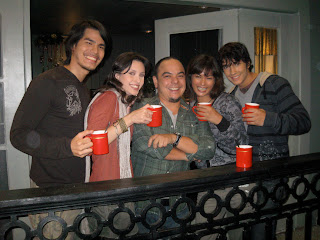 Just in case you were wondering. Yes, that is yours truly in the Nescafe Coffee Christmas commercial. Shot only last October 30 at Production Village in Makati, I am amazed at how quickly it was able to be broadcast.  And although I may have been the shortest and least strikingly gorgeous among the cast, it was I who had the "money shot" so to speak. Apparently, being the person who is seen sipping from the cup is the most central role of all.  Seen above is my fellow multicultural cast. The quiet and brooding half Japanese/half Venezuelan Kenji Rivas, the gorgeous Brazilian model Malu Melo (who is also cast in the latest Pepsi ad with Bamboo), me, the funny and fantastic German/Filipina/DJ Christina Bartges, and Canadian model/bodybuilder Chris Davis.  The ad was directed by Steven Ngo and assisted by Kristine Rada.
I would really like to get a copy of this downloaded onto youtube for my files, but dang.  I don't know how to record things from TV anymore.
And to Brian, who posted great Lomo shots of the Intramuros Deluxe walk on his site Stochastic: Thanks bro.
Posted by carlosceldran at 7:44 PM 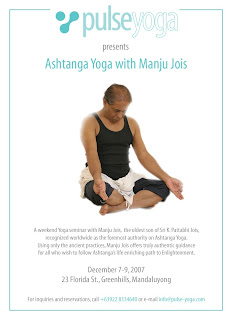 A SHAMELES PLUG IN BEHALF OF MY WIFE...
Ok, all you yogistas out there.  Check out the newly opened Pulse Yoga Studio at 23 Florida Street in Greenhills.   It's new, it's chic, and it's the hippest yoga studio in town.  Tesa is an instructor there (she was just certified this year by Alex Medin under Yoga Alliance) and - not to gloat, but she is one of the best there is.  First on their agenda this December 7 - 9 is a weekend Yoga workshop with the famous Manju Patthabi Jois of Mysore.  Son of the famous Sri K. Patabhi Jois, recognized worldwide as the foremost authority on Ashtanga Yoga. Manju's workshops are distinct for it's incorporation of pranayama ("life breathing") and vedic chantings to enhance yoga practice. Call/text them at 0922 8334640 or email info@pulse-yoga.com.  You can also check out Manju's site (check out the really groovy music) and Tesa's site here.
Namaste, y'all.
Posted by carlosceldran at 9:44 AM 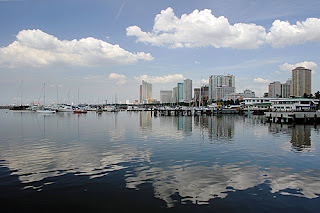 GOOD ONE, MATE!
A million thanks and a box of cookies to Brett Debritz of Australia's Courier Mail Lifestyle section who was sweet enough to mention me in a column called, "In Imelda's Shoes".  It's a wonderful article, which illustrates Manila as a city that is at once chaotic but nevertheless interesting enough for a visit.  Thank you so much, Brett, for "getting it" so to speak and for being brave enough to come to Manila despite the Glorietta explosion. I sincerely hope to see you once again back here in the city of affections.
IN IMELDA'S SHOES
Manila is everything you'd expect of a bustling Asian city, and quite a few things you wouldn't expect.  Read the rest here...
And kudos to the Peninsula Manila (I have been their in-house tour guide for years) and Philippine Airlines, for sponsoring Brett's visit.  It just shows you that a little hospitality and graciousness can definitely change any person's perspective on a city.  Here's to hoping that you guys sponsor more travel writers trips to the Philippines.
Thanks to boerx for the picture of Manila Bay.
Posted by carlosceldran at 12:45 AM

THE SAD TALE OF MARIANNET AMPER 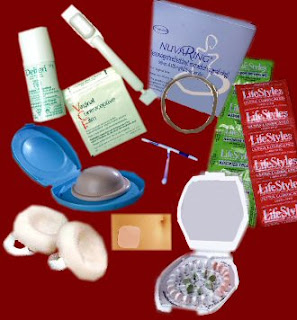 So the Philippine government has accepted responsibility, GMA has expressed her indignation, and the Philippine Catholic Church has passed the blame onto all of us for the suicide of Mariannet Amper.
For those of you who haven't heard yet, Mariannet Amper is the 12 year old girl from Davao who committed suicide due to the poverse circumstances of her family.

Now although it's rather big of the abovementioned to express their sadness and anger over such a senseless death, I don't share the opinions of the Church that it is completely OUR fault. I'm sorry, that is a copout. At the end of the day, it is you, The Catholic Church, and the Philippine government who should be to blame. NOT ALL OF US. I mean, the matter here is really simple. Cry, complain, and bitch all day long, but for as long as you folks in the National government and the Philippine clergy DO NOT SUPPORT family planning, and promote artificial methods of birth control among the most desperate of our countrymen, stories like Mariannet will perhaps become a common one.

I mean, really. To deny that overpopulation and improper sexual education is NOT a major reason why poor Filipinos cannot rise out of their dire situation is sheer idiocy. To turn a blind eye to this connection is tantamount to killing your own people.

So back off Bishops. Don't pass the blame onto us. We, the Filipino people, just like Mariannet are victims of your myopic outdated and insular policies.