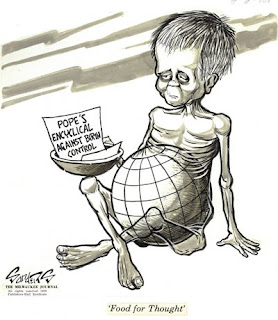 To which I replied:

STOP SENDING YOUR CATHOLIC DOGMA TO ME. I AM A CATHOLIC BUT YOUR VIEWS ARE MYOPIC AND I'M SORRY...JUST PLAIN WRONG. PASS THE REPRODUCTIVE HEALTH BILL NOW!! JOIN THE CAUSE.

"I am praying for you everyday that someday you will realize what you are saying is not true."

Well, unfortunately for this poor misinformed self-righteous lady who doesnt' realize that contraception IS NOT ABORTION, I also received this text a few days ago from my friend Beth Angsioco who is a leading light in this advocacy:

"Today is a historic day for RH advocates, The HOR session (in Congres) saw the sponsorship speeches of Representatives Lagman and Garin on the RH bill after more than ten years of unrelenting advocacy work. Sponsorship speeches shall continue next week after which the debate shall continue. Rep. Lagman says that this is the start of the irreversible process of approving the bill."

Nevertheless, good news aside, a lot of work still needs to be done to show Congress that there is massive public support for this bill. Over 90%, if Pulse Asia is to be believed. Apparently, even the president secretly supports this bill.

So please, if you can, sign the petition above (or better yet, sign the hardcopy petition itself - I can send you copies to bring around your neighborhoods). Or join the plenary hall session (M-W 4pm onwards) to show your support. You can contact Mags Lopez at lopezmags@yahoo.com to see how you can volunteer in Congress.

Don't allow the Catholic Church to use heavy handed tactics to get their way again. The separation of Church and State in this country is in the constitution. Don't let them drag us back into the days of Noli Me Tangere again.

Remember, the bad guy was Padre Damaso.
Posted by carlosceldran at 8:28 AM 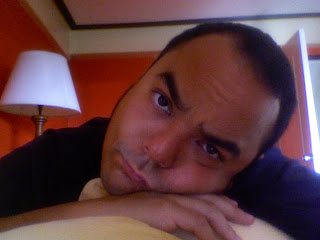 I'm sick again. Gosh. I have no idea what the hell is going on with my immune system. Just yesterday, I lost my voice and had to cancel my hosting at the Amorsolo Festival Opening Night at the Shangri-La Hotel. Right on the heels of my last cancellation at the Palanca Awards. My doctor told me that I'm working myself to the ground. I really need to take a long break and let my body heal.
But nevertheless, at least now I'm given downtime in bed to finally post the entries for my Unbearable Lightness of Being Bakya Contest sponsored by HAPPY FEET! Here are a few samples of what some folks out there consider as "bakya". 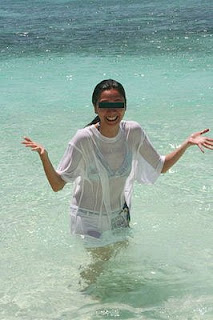 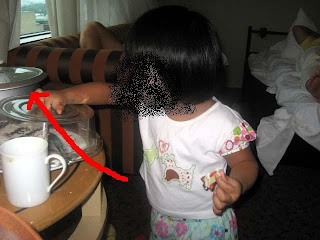 Bringing your own rice cooker on your travels: Bakya. 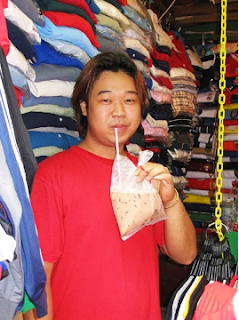 Drinking softdrinks/sago-gulaman in plastic bags: Soooo bakya. Guys with one long nail (usually yung hinliliit or pinky): Not sure if it's in the "cute" bakya category or "kadiri" category. But them both together, and it's a double whammy bakya moment. 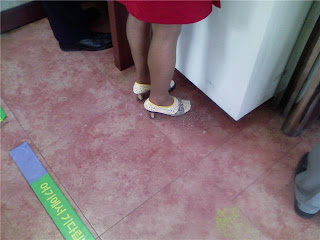 Wearing socks with slippers, and if the slippers are heeled slippers: Triple Bakya. 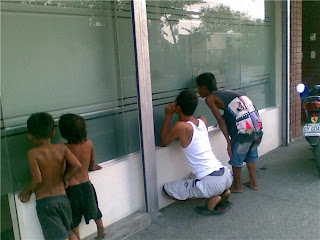 Making boso: Bakya. (I think it's more "bastos" than anything else, actually) 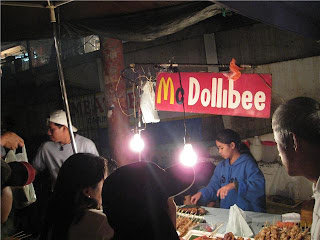 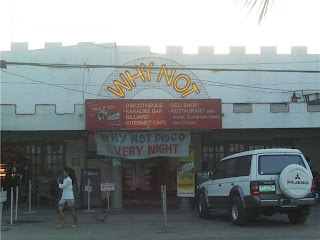 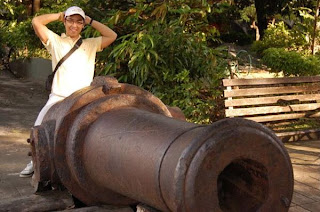 Cheesy poses are also very Bakya. Especially when done in a public place.

Here are the written entries:
-Malalaking lata ng biscuit na dinadala ng mga pauwi sa probinsya. (The big cans of biskwit that people bring on buses back to the province.
-Sofa sets covered in plastic for posterity
-Plastic flowers, especially when they have gathered the dust of the centuries. Flowers are meant to wither after their expiry date, oy.
- A rainforest of plastic plants and trees as office decor.
- That blinking cell phone borloloy. Aren't the bars enough indicator of how strong the signal is?
- Cheap dashboard decors of the day, the ones that everybody else has
- Moviestar adulation to the point of using his/her cutout pics as bedroom wallpaper
- Asking a movie star's autograph or minding him/her when the celeb is trying very hard to melt in the crowd
- Many Manila's streetlamps, especially those that have lost all sense of proportion.
- Demolition of defining art/architecture and historical heritage sites, then replacing them with high-rises with terrible architecture.
- War and terror as a means to resolve disagreement.
- PR stuff passed off as news.
- Media content that's 90% PR. Repeat after me: Nobody reads PR stuff. (Not the fault of PR writers, though.)
- Giant billboards with certainly unattractive faces. If you decide to invade our public spaces, be sure you look either really gorgeous or holy enough to be adored as god/God/someone godly.
- Tabloids that thrive on nothing but porn, plain tsismis, and other pure forms of sleaze.
- Overdone 'kulots' in singing ballads.
- Fair and brown-skinned ladies who are pug-nosed and bleach their hair blond.
- Polyester barong. No explanations necessary.
- Inserting an incongruous 'h' in one's name to make it sound more foreign and even more foolish. Examples: Romy --> Rhomy. Michael --> Michaehl. You're not Portuguese.
- Not falling in line
- Throwing one's trash in the street.
- Living off other people's misery.
- Show biz personalities who enter politics armed with nothing but little knowledge, skill, and suspicious motives.
And all the rest written here:
Well, so far, these are the entries I have received, I have extended the deadline to October 1, 2008. Hope to get more entries this week. Cheers!
Posted by carlosceldran at 7:11 AM

CIVILITY ON THE ISLAND OF HELENA... 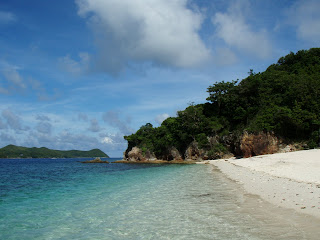 Mangenguey Island. Now say it fast seven times. I know. It’s a mouthful. And it’s pronounced Man-gen-gey. All hard G’s.
Set in the westernmost end of the Calamianes Islands in Palawan, Mangenguey Island (formerly known as Treasure Island) is the brainchild of my friend Katya’s mother, Helena Carratala Mander, known by most as Helena Guerrero of the iconic 70’s Filipino fashion label Azabache.

Truth be told, when she first told me about creating a membership-only Artist’s Utopia three years ago, I just couldn’t visualize it. It sounded too abstract, too idealistic, and too impossible. I just didn’t seem to get it. And finally, after months of waffling, I finally accepted Helena’s invitation to check out Mangenguey.

And after a hour long journey to Coron, and an hour-long banka ride, my friend Ria and I finally arrived on the island of Helena. And what a world it was. 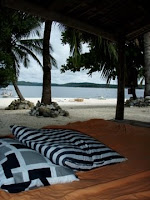 It was a world where I could wake up to fresh coconut juice from the tree outside my window. (above). 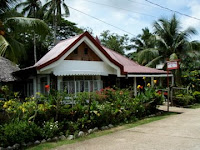 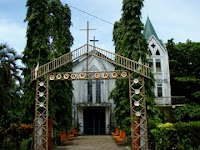 It was a place where I could take long banka rides to small quaint towns and read books by the seaside (below). 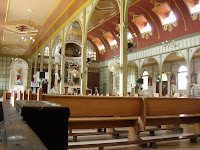 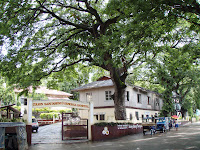 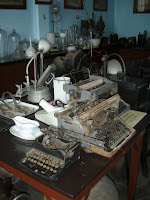 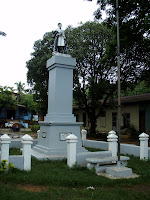 And for an attention deficient individual like myself, the cathedrals, plazas, restaurants – well, make that restaurant - and leprosy museum on the island of Culion nearby provided stimuli at a very relaxed pace (above). 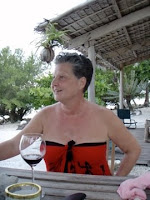 Even the luxury of having long lunch conversations with Ria and Helena (above) and having the time to finish reading Ambeth Ocampo's Rizal's Overcoat were indulgences comparable to sipping Cava at sunset - which we also did. Really, my only issues were about figuring out what I could do constructively to kill time between dinners of grilled quail and artichokes. I only problems I had were luxury ones. 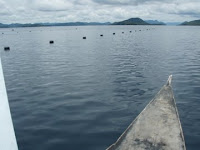 And four days later, as I sailed back through Jewelmer’s pearl farm buoys on my way towards Coron, it seemed like I was floating through a broken necklace of black pearls strewn across the South China Sea (above). It was a perfect metaphors for a gem of an island and a developing artist’s utopia. 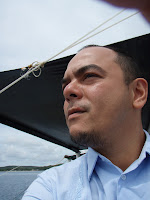 I finally got it.

Read about her vision here: www.mangueguey.com

Posted by carlosceldran at 12:48 AM

BACK IN THE GROOVE... I'm back in the pink of health. And man, did it take a while. After a full week of rest, steroids, anti-biotics, paracetamol, peipakua, African sea coconut tonic, and a trip to Corregidor to recuperate, my voice is back and the infections and fevers are gone. A million thanks to everyone out there who sent me their best wishes. 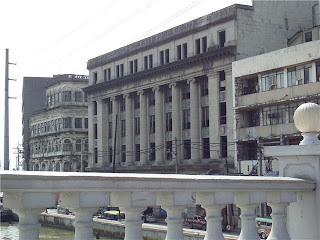 I did notice, however, while on a trip downtown to Ongpin to buy medicine, that there is construction activity going on at the former Citibank headquarters by the Pasig River. It seems that the broken windows have all been removed and some scaffolding put around the ground floor. Now, is this a good sign or not? After surviving World War II and "development" for the last eighty years or so (below in the 1920's and 1950's), I hope they aren't going to tear the poor thing down like both the Deluxe and Avenue theaters. 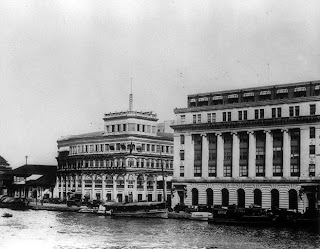 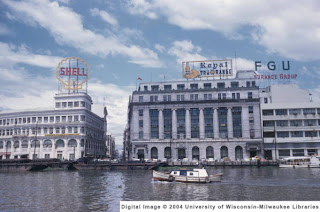 Hopefully, the Citibank building will go the way of the Philtrust Building on Plaza Moraga, which is now being restored and repainted to it's former glory. I can't wait to see what the result will be like. I never liked Philtrust and it's owner Don Emilio Yap's attitude towards heritage structures (his defacement and desecration of the Manila Hotel is simply criminal) but this project, I'll give him props for. 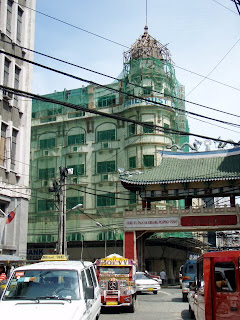 Give me a little time to get back on track with the blog though. I shall be posting the winners of the HAPPY FEET contest in the next few days.

AND NOW FOR A LITTLE BREAK... 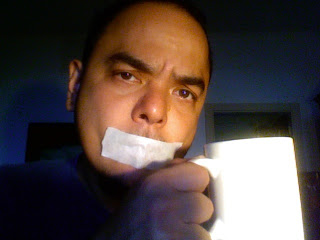 I am sick once again. Apparently, my throat is in the worst shape it's ever been.  My vocal chords are shot to all hell and I am taking a regimen of mild steroids and anti-biotics to bring down the inflammation and fever. The doctor says it's exhaustion.  So, I'm not answering my phone, I'm going to drink ginger tea all day and I cancelled all tours in order to keep my mouth shut for the rest of the week.
And my apologies to all out there who were on my blogroll. I erased everyone on my blogroll. I am only checking blogs that are on my computer bookmarks.  Nothing personal.  I just don't like announcing to anyone who I read anymore.
Posted by carlosceldran at 4:48 PM