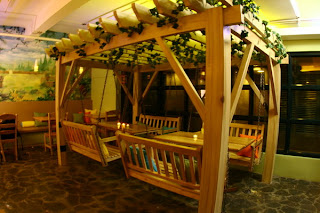 A WHOLE LOTTA CREPE...
In line with my support for ANY tourism related venture in downtown Manila, allow me to recommend the restaurant, Crepe de Chine. And I do this not because of it's ambience, mind you. Located in the basement of the supposedly Michael Graves designed World Trade Exchange Center on Juan Luna Street, Crepe de Chine can best be described as the Binondo love child of Country Waffles and Delifrance. And though the atmosphere might be a bit twee, it soon becomes obvious that it's all about the food over at CDC. Their menu, which is also quite eclectic, mixes the savory nature of Oriental cuisine with the charm of French comfort food. I especially liked their adobo crepe, yang chow crepe, pizza crepe, seafood pasta, and freshly squeezed Mandarin Orange Juice (that alone definitely worth the trek downtown). And for all the media and advertising folk working over at the El Hogar Filipino down the street, this is good information to know if you're looking for something different from the usual neighborhood fare. 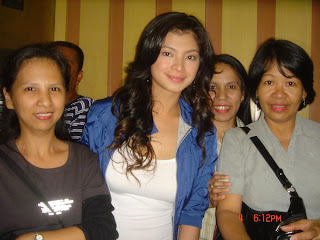 And look, even celebrities like the place. Log onto their site and guest album here.
CREPE DE CHINE
World Trade Exchange
215 Juan Luna St. cor Dasmarinas St.
Binondo, Manila, Philippines
Monday to Saturday
10:30am up to 9:30pm
244 2270
Posted by carlosceldran at 11:20 AM 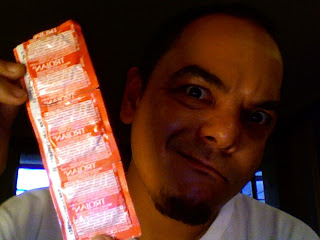 To all those out there who sent their best wishes regarding my little project of giving away modern methods of birth control, I say, "thanks, guys."  Some words you sent were very nice, while some were TOO nice in fact.  Because at the end of the day, there is no need for the kind words.  What I'm doing does not require any special talent.  Giving away condoms and pills is something ANY idiot with a little money and a pair of hands can do.
Some snippets sent to my mailbox:
"The article reminds me of my son's first yaya. She was in her early thirties with eight children. It broke my heart that she was helping me care for my baby while her youngest was not even a year old. To make a long story short, she got pregnant during her holiday and decided to return home. One afternoon, I entered her bedroom, I found eight identical little stuffed toys. This image will always be in my mind. As parents, we want to try to provide for our children. In her place I employed two of her sisters. They have been with me for six years now. If you ever need extra funds for the contraceptive donations, I'ld like to make a humble contribution."
"I loved the article in the Sunday Inquirer today about you handing out contraceptives, especially given all the crap I've been reading about the opposition to the reproductive health bill. How can I make a donation to help you buy more? Can you give me a bank account number so I can make a deposit? Or can I have a check delivered to you?"
"Great article on PDI mag re your efforts to distribute modern FP. Galing! Hope Madame GMA and her cohorts are taking note as well."
Well first of all, please don't send any money.  Yikes!  Aside from being an abortionist, estafa is another accusation I would want to avoid here.  If you wish, you can get TRUST Pills and TRUST condoms at any drugstore (generic ones being cheaper than Mercury, for sure).  It's only Php30.00 ish for a one month cycle of pills and Php10.00 per condom. I will be more than happy to pick 'em up and give them to mothers who want them (and Trust me, I know many).
Or better yet, let charity begin at home.  Keep a stash of it in the cupboard and give it away to those around you who may need it.  Have condoms in your car for the "park-your-car" guy, buy a year's worth of pills for the squatter mother next door, give the yaya a tubal ligation, or gift your driver with a vasectomy (PROVIDED OF COURSE THAT THEY WANT IT).  Forcing them to have one, well, will bring about really strange and perhaps ugly scenarios.
And I know an organization that helps provide ligations for mothers in need.  If anyone out there wants info on this, you could text or email my address above.
Because, really, if the government won't set aside the funding or effort for this glaringly obvious need in our society, then perhaps we all should start doing it on our own.  Promoting sexual responsibility and advocating family planning (in all it's methods) doesn't require superpowers at all.  I can do it.  I'm sure all of you out there can as well.  No doubt.
And as for those who sent criticism regarding this matter, I ask, "Where are you?"  I am actually surprised that I received zero criticism so far about giving away pills and condoms. Hmmm.  Why is that?  Do Filipinos really secretly support this bill and won't say so?  Or perhaps, I may be talking too soon..
Posted by carlosceldran at 5:08 PM 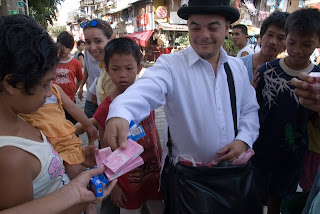 
Ok. To all the 50 or so people out there who I stood up last Friday because of my illness, my deepest deepest apologies. I got the results back from the hospital and fortunately, it's not Dengue Fever as I had feared. It was just a blood infection coupled with strep throat, and the flu. Nevertheless, my doctor told me to relax. I should stop doing the tours eight times a week, they said. Along with my consultancies, media stints, hostings, writing assignments, and opening up the CCP Shop and my space in Intramuros, apparently, I had worked my body to the ground and my immune system was shot to hell.
I think I'll take his advice.  Although I love what I do, I'm not sure if I'm willing to die for it. And Lord knows, last Friday, I thought I was going to do so.
Meanwhile. Check these guys out.  They are fricking hilarious.  They made me smile on my sick day...
Posted by carlosceldran at 2:13 PM 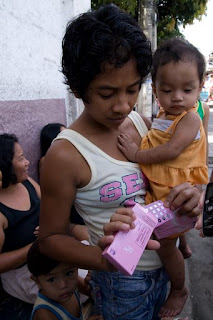 Haynako. Here goes the Catholic Church again trying to rally people against the promotion of artificial methods of birth control. Apparently, they plan to mobilize (read: FORCE students) to protest against Ping Lacson’s Reproductive Health Bill because it “promotes” abortion. Whatever. If they read the bill at ALL they would realize that ABORTION HAS NO PART IN IT WHATSOEVER. Jeez.  If they spent as much time and effort battling something more threatening to society, like tobacco smoking, alcoholism, environmental degradation or corruption, they would be more effective in making The Philippines a better place than wasting their time on these stupid rallies. But then again, the Catholic Church obviously thrives on ignorance and increasing poverty. In a progressive secular society, nobody would be able to give them the time and money that they are receiving now.
But I have faith that things will work out in the end. I truly believe that many Filipinos see through the lies being given by the old and out of touch men who run this institution called the Philippine Catholic Church. I mean, c’mon. This is the very same institution that wanted Jose Rizal dead, and that wanted the Noli Me Tangere banned from all schools. I think it’s been proven rather well that the Catholic Church isn’t always correct when it comes to many matters. And this one is definitely one of them.
NOTE: For all the folks who happen to be near these “PRO LIFE”* rallyists, do me a favor, throw cold water on them. It seems they only have sex on their mind so I think it’s best we wake them up and make them think of other matters.**
*I use “” simply because their pro-life stance ironically kills more women and children than saves them.
** Sadly though, my insiders say that because of pressures given by the Church, the formerly 140 supporters of the bill in Congress has dwindled to just 40. Pathetic spineless Congressmen. Typical.
That’s all I have to say for now. Read the Sunday Inquirer this weekend if you really wanna hear me rail against the hierarchy of the Philippine Catholic Church. And if they Church threatens to excommunicate me, that’s just fine. I’ll be in the company of Jose Rizal and Madonna. That ain’t so bad, really.
Thanks Tammy David for the photo of Intramuros squatter mothers getting my free birth control pills.
Posted by carlosceldran at 6:13 PM 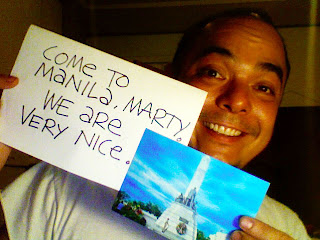 Just doing my bit in hoping that Martin Scorsese will accept the invitation to this year's CineManila.  Read about it on this blog, Marty in Manila. For those of you who missed the movies of the just concluded Cinemalaya, shame on you. This years' selections rocked. Congratulations to all the candidates and to the Cultural Center of the Philippines for the quality curatorship. Furthermore, it was refreshing to see that not all of the movies were about being poor and how poverty can be noble. Not that I am diminishing the situation, mind you, but it is nice to see Filipino middle class values and aspirations represented for a change.
Posted by carlosceldran at 10:13 PM 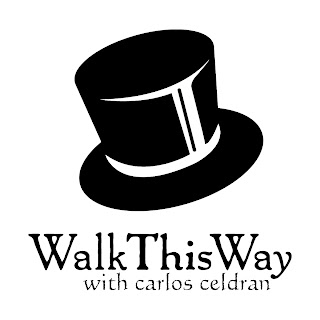 This is my new logo for Walk This Way! Walking Tours.  It was done by graphic designer and ex-scientist Cathy Young.  Whatchathink?  I think it's cool.
Now if only I knew HTML, I could stick it on the top of the sidebar of my webpage.  Anybody out there know how to do that?
Posted by carlosceldran at 7:56 AM 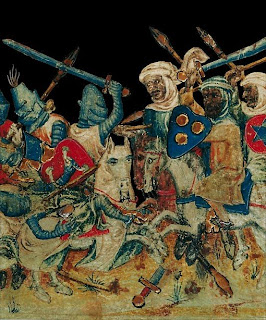 I've been doing a lot of thinking this week.  A dangerous act, I know.
Throughout the week, it's been a real myriad of mental data, some good, some bad, some whatever. It's been theocracy, democracy, internet gossip, war, cheap ligations in Caloocan, Gawad Kalinga, high fashion, low fashion, Intramuros politics, calorie management, The Cultural Center of the Philippines Shop, The Sofitel Hotel, high food prices, global warming, Catholic Church politics, Manila Street Art, Poverty Tourism, and Tesa's Yoga Retreat that has been on my mind all week.
And now, fricking this...
Don't click on it unless you have two hours to kill.  I'm off to walk along the boulevard to clear my head.
Mood:  Don't know...
Posted by carlosceldran at 9:00 AM 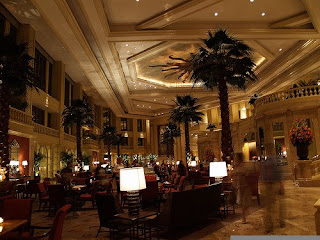 Did you know this about the Manila Pen?  I didn't.  How cool.
Thanks Sandra Scott for the shout out.  Read her article here on chocolateatlas.com.
Thanks tikpaklong for the photo.
Posted by carlosceldran at 9:02 PM 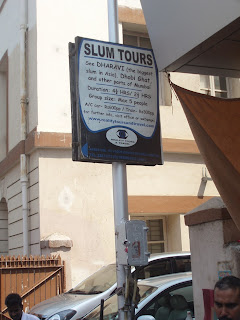 As featured in the Philippine Star, read Gino dela Paz's article called "Slummer Holidays". It's a feature about this new trend in leisure travel called "Poorism", (a term that mixes "poverty" and "tourism") which is apparently all the rage now in India and Brazil.  But is "poorism" really helping the poor or objectifying them?  One wonders.  Either way, perhaps that's the word I should've used for my former "All the Way Down to Chinatown" tour, the one where I would take unsuspecting folks into the House on Madrid Street where we would hand out free birth control and discuss social issues. Good thing I never really charged people money for that tour (I only accepted anonymous donations) - lest ANYONE OUT THERE think that I make money off the less fortunate.  Thank you Barefootincowshit for the photo.
Oh, and thanks a million to Jenna Castro of Guidon Magazine for the great article!
Posted by carlosceldran at 9:53 PM