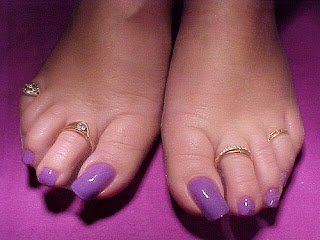 LAST STRAGGLERS FOR THE HAPPY FEET CONTEST!
(Some said that:)
Long toe nails are bakya  .
Picking ones nose in public is bakya.
Speaking Filipino English... F = P, TH = D, V=B is very Bakya.
(Some asked:)
Is drinking Tap water bakya?
Is riding a jeepney Bakya?
(Meanwhile, some have loudly declared:)
BAKYA: Balikbayans who insist on making a pilgrimage to the Wowowee show
BAKYA: Modern buses labled with portmanteaus of the owners' or their children's names (like "Nimfel" or "Marsoltina")
BAKYA: Driving all the way from QC to check out a giant shopping mall, because it's new and it's big! (Never mind that it has the same retail stores as your neighborhood shopping mall.)
BAKYA: Denying that you like Tagalog movies/telenovelas, when you've got Cinema One/ABS-CBN/GMA 7 programmed on your TV remote. (Hypocrisy is bakya.)
BAKYA: Following Betty la Fea, the Pinoy version, even though you've already seen the original Mexican telenovela and Ugly Betty.
BAKYA: Insisting on a wearing an accessory or clothing that is sold in every other stall in Greenhills' tiangge. (Safety in numbers does not exempt you from being bakya!)
BAKYA: Buying every version of a gadget, in the hopes of staying current. How many iPods do you own? (Unfortunately, my husband has every single one.)
(Apparently, some believe singing along is bakya.)
Whatever other people say, to me its still bakya to sing to a one man band in curlers and hair net (meron pa ba nun?). Furthermore, a bakya house must have a Last Supper in their dining room, huge wooden spoon and fork from Baguio, those paintings of gambling animals and seven horses in the living room, Malate art,  chunky jewelry, huge logo of designer brands - although fake naman.
BAKYA: The cult of useless, dangerous (as in if people copied them, our society would be in danger), delusional celebrities. My top four: Kris Aquino, Ruffa Gutierrez, Boy Abunda, and Tim Yuck. (Note: these last four names are not MY choices, but the choice of one of the entrants).
Log onto the Happy Feet website here!
AND THE WINNERS ARE..... Drumroll.... 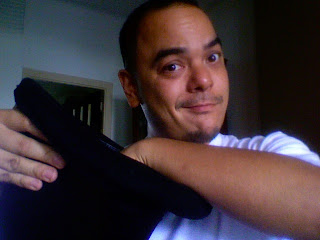 Posted by carlosceldran at 9:33 PM 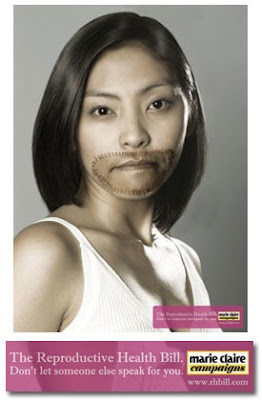 Doing my bit to Support The RH Bill...
Allow me to shamelessly plug and laud Marie Claire for taking a stand to support the controversial Reproductive Health Bill. Same goes for BBDO Guerrero, who created their ad campaign dubbed "Marie Claire Mouths" (above), the first in a series of Marie Claire campaigns.  I'm also delighted to add that "Marie Claire Mouths" bagged honors in the recently concluded 2008 Tinta Awards. The entire campaign brought home the Bronze in the Sports/Entertainment/Travel & Leisure category, while one of the print materials was given the Silver in the Sports/Entertainment/Travel & Leisure category for a single material.
The Tinta Awards is the first Philippine Press Awards launched by the United Print Media Group (UPMG). They aim to encourage creativity and excellence in print advertising.  Check out more of the Marie Claire Mouths campaign in the 3rd Anniversary issue of Marie Claire featuring Judy Ann Santos on the cover. Really, I'd buy it because this 3 page feature is really the quickest, most concise way to digest all the statistics and details regarding House Bill 5043.
This Monday night (Nov. 3), I shall also be on Zoe Channel 5 with Mr. Bob Guerrero to discuss the RHBill 5043.  And finally, there will be a concert on December 12 in UP Diliman to show support for the RH Bill.  Log onto the "I WILL SUPPORT THE RH BILL" on Facebook or onto this site for updates.
Posted by carlosceldran at 8:23 PM 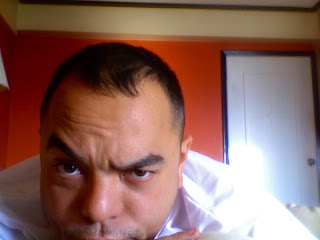 And Woof! The jetlag is bad. Anyhoo. Once my luggage gets in - an idiot over at Ben-Gurion sent my maleta to MAN (Manchester) instead of MNL (Manila) - along with my brain, I'll start putting up more posts which will hopefully, not send pro-McCain and anti-Reproductive Health Bill folks into hissy fits.  Coming up, long over due resolutions to the Unbearable Likeness of Being Bakya contest and updates on my Santre experience...
Posted by carlosceldran at 7:45 AM 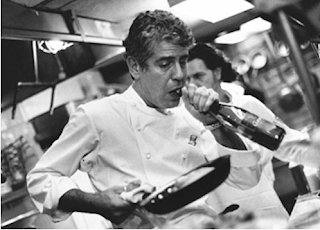 BETCHA BY BALUT WOW.
Spotted by the buffet at Sofitel Philippine Plaza.  Anthony Bourdain, who is in Manila apparently to do a feature on Filipino cuisine (hope tries something less cliche than the balut). I was supposed to tour him around our fair city but unfortunately, I wasn't asked. Ha.
Either way, hope you have a great time in Manila, dude. Thanks D Magazine for the photo.
Oh, and word has it Bobby Chinn is coming to town too.  Celebrity chefs seem to be really discovering the Philippines. Good for them.
Posted by carlosceldran at 3:28 PM 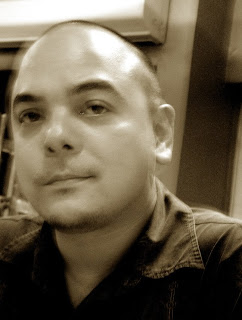 
Sigh. Just another example of what can happen when you mix ignorance, bigotry, and religious righteousness. God save America. God save us all.  Remember kids, never let religion influence your government's decisions.  It only promotes intolerance.  Separation of Church and State. Article six of the Philippine Constitution. It's good for ya. Wink..  Greetings from Jerusalem. Tomorrow I check out the Via Dolorosa and will wail at that wall.
I'll be back in Manila by the end of the week. Thanks Bryanboy, for the link...
Posted by carlosceldran at 3:41 AM

AND NOW FOR A LITTLE BREAK... 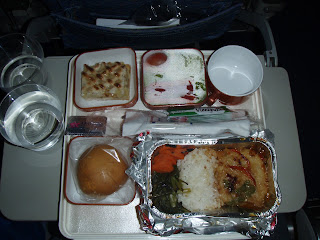 Sorry guys. I'm out of here. For the next two weeks, I will be checking out the ancient cultures of Egypt, Turkey, and Israel. All tours of the dear City of Manila, rallying for the Reproductive Health Bill, and announcement of the winners of the Happy Feet Bakya contest will resume on the 28th of October. So sorry for the abrupt departure, but I really needed the break. Meanwhile, if you really need a tour guide, click here.  Above, dinner service aboard Egypt Air, MS 959 Bangkok to Cairo.
Posted by carlosceldran at 1:53 PM 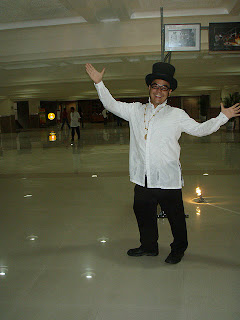 So it had come to pass that last Sept. 30, Tuesday at 4pm, I went to Congress to show support for the Reproductive Health Bill (HB5043). And I must say, it was a very good day. I was really glad to see that our side (the PRO RH Bill side) filled Congress galleries to the rafters. It looked like we were thousand folks more or less on our side of the galleries. People from all walks of life were there, all dressed in Filipiniana or in purple. Urban poor, urban rich, young, old, men, women, gay, straight all showed up to make it known that the RH Bill's time has finally come.
And as for the opposing side, their contingent was rather sparse and lifeless. The ANTI RH Bill section was half empty in their upper galleries, occupied mostly tired looking ladies in blue and white SM Shoemart salesgirl uniforms from some League of Catholic Something or the other. The PRO RH side was definitely more diverse, energetic, and passionate about the issue.

Unfortunately though, and unsurprisingly, some FREAKSHOW named Rep. Del Mar from CEBU kept "suspending" the session because of a technicality. He cited that the PRO RH people's use of a powerpoint presentation was an "underhanded" tactic to undermine the process or something like that. All in all, because of this freaks' whining and grandstanding, nothing was discussed and the debates were moved to Thursday October 3 or after Nov. 10. Golly gee, Mr. Del Mar, thanks for wasting taxpayer's time and money. And why so afraid of us? You afraid that your theocratic nonsense can't stand up to logic and scientific fact? Yo, Cebuanos, Be smart. Don't vote for this idiot in the next elections, eh?

But anyhoo, I said that it was a good day because it's now it has become obvious that our side now has the numbers (in the galleries, the Pulse Asia polls, in Congress) and the opposing side has now become so desperate that they are resorting to delay tactics to avoid losing the game (which I feel they will). And on my "I SUPPORT THE REPRODUCTIVE HEALTH BILL" facebook page, even important folks like Lea Salonga, Joanne Andrada, Manny Castaneda, John Silva, Ria Tanjuatco Trillo, and Jim Libiran, have joined the ranks of Cherie Gil, Lisa Macuja, and Pat Evangelista when it comes to supporting this issue.  Even the Management Association of the Philippines and Philippine Chamber of Commerce and Industry had come out in support of RH 5043.

But let's not pop open the champagne. It has not been passed into law yet. And who knows what might be done between now and then to undermine our momentum. After all, it's more than apparent that the other side does not like playing fair, and they have enough funds to buy full page ads of disinformation and innuendo. We MUST stay on track and keep this PRO RH momentum going till it's finally passed in the next session. Now is NOT the time to slack. Stay tuned... 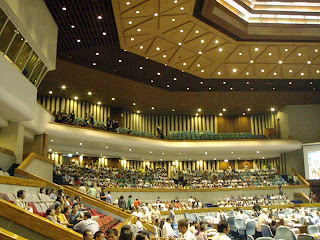 Their side (note the empty seats up front and upper galleries). 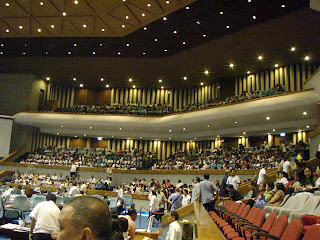 Our side. Packed all the way to top floor.

Oh, and if you are looking for other folks NOT TO VOTE for in the next elections. DO NOT vote for Liwayway Chato, Roilo Golez, Rufus Rodriguez, Rene Velarde, Amado Bagatsing, Roman Romulo, Adam Relson, Erbie Fabian, Eduardo Zialcita, Annie Susano et al. These are scary folks who are all supporting the CFC's pursuit to spread lies and untruths about reproductive health and let their religion supercede all forms of logic.
Can anyone add more congressmen who should be added to the list?
Posted by carlosceldran at 10:40 PM