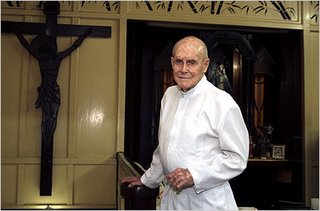 FORGIVE HIM FOR HE REALLY DOES NOT KNOW WHAT HE IS SAYING...
It's no secret that I believe the Roman Catholic Church of the 21st century has been very misguided as of late. Their restrictive policies about women's roles in Catholic institutions, their insistence on meddling in Philippine government policies and their retarded view towards contraception and homosexuality are only a few of the things that made me proudly assert my Cafeteria Catholicism. But after reading the Ateneo de Manila's "beloved" Father Reuter's defense of the accused in the Subic Rape Case, I'm now thisclose to ditching everything and going Protestant - heck, Pagan even. In an article in The New York Times, he inferred that the victim in the aforementioned case was a "seductress" simply because she was older than her attacker and claimed that she really instigated the whole thing (Um, so I guess it was also her idea to get assaulted and have her drunk immobile body dumped on the side of the road too, eh?). In addition, he called the accused, Danny Boy, the real victim here. Even bizaarely referring to him as the "baby boy". Now this is totally out of line for a man who has zero ideas about sex and even much less about sex crimes. Click here and blow your freaking mind on the words of this aging Jesuit. And to all of you out there from all the Ateneo de Wherevers: Please, I would Looooove to hear your take on this.
Posted by carlosceldran at 1:37 AM