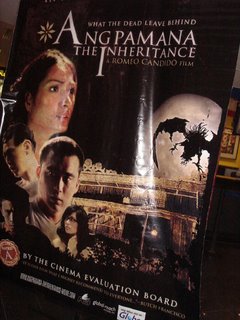 MONSTER MOVIE!
C'mon Everyone. You only have two more days to go to watch "Ang Pamana: The Inheritance". It's a fabulous movie about homecoming Filipino-Canadians who are terrorized by the monsters which inhabit the old house they inherited from their grandmother. Completely shot in 35mm and set to super duper surround sound, it's perhaps this year's glossiest Filipino film. Done in English with subtitles under the spoken Tagalog parts, I highly recommend this film to any English speaking foreigner, and Filipino English language trainee who wants to learn more about Filipino folklore, traditional animism, and the "aswang". Highly recommended by the the MTRCB (Movie and Television Classification Board) for it's high production values, the film was giving an "A" rating, and now enjoys tax free status. (Above) Picture of the movie poster at the premiere in Shangri La Mall. (Below left to right), director Romeo Candido, actress Caroline Mangosing ("Lola"), actress Nadine Villasin ("Anna") , and Darrel Gamotin ("Johnny") being interviewed by MTV Philippines. The movie also stars Phoemela Baranda, Nico Garcia, Victor Neri. Their award nominated website can be accessed here. 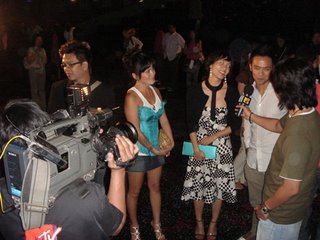 Posted by carlosceldran at 2:48 PM