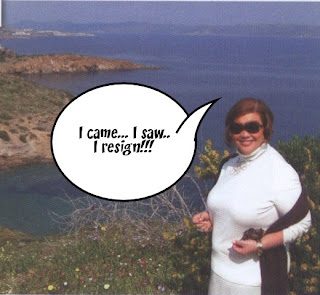 I promised myself that I would not talk about Malu Fernandez and her horrid article here and here. I am trying to change my ways and not kick a hog while it's down and out. But being the hypocrite that I am. Here I go.

Frankly, it seemed like there was no point in talking about Malu. After all, knowing this woman almost all my life (our fathers both work in the same hospital), what happened really didn't come as a surprise to me nor to many who knew her. Really, think about it. If I was an overfed, overcompensated, unwanted baby who was never as pretty or popular as her older sisters and parents, than maybe I too would end up bitter enough to demand an advance on my inheritance and spew out poisonous banter to no end. But I consider this current situation to be completely understandable in her case though. She really couldn't help herself.
After all, we must realize that Malu was not bred in a vacuum. She is a result of an entire lifetime of people around her condoning her bad behavior. (In fairness to her family though, I only heard vile things come from Malu and nobody else. None of her sisters, nephews, uncles, and aunts etc... have said anything close to the point of view that Malu seems to so have proudly shared with us all - or at the least, none of them have said anything directly to me so far). And just like any spoiled child, Malu can't be fully blamed for the value system that she acquired. She is a victim of a social/sosyal disease and the friends who indulged her. After all, when she said her friends found her article hilarious, I believe her. Now I'm not saying that she is representative of most members of the Philippine elite but let me tell you right now that she is definitely not alone in the matapobre (kill the poor) department.

In fact, what happened to Malu could happen to quite a few other members of the upper classes. Just last week, I heard that some of her other friends were commenting how she kinda "took the bullet" for everyone, so to speak. And this I consider as a sign of how detached the Philippine rich (and their wannabes) are from the realities of our country. I mean really, the Philippine elites are a completely blessed bunch who do not know or care just how blessed they are. Just look at the PIPC scandal. Some Singaporean guy named Michael Liew runs off with U$250million from the pockets of the Pinoy perfumed class and both our country and it's economy are still standing. Php250 million! That's almost the entire Gross National Product of the Solomon Islands or the cost of a brand new international airport and yet nary a dent was put on our currency nor our stock markets. This only proves that that the Philippine elites have the financial capacity to pull the country out of poverty but yet it's their apathy and lack of priorities that prevent them from using this money to achieve social progress.

And if anything, Malu is clear and tangible proof of that.

So there you go, Philippine elites. Get your act together. Prove to us that you aren't also a bunch of Malus.

Thank you analyn for the picture.

On similar matters - kinda. Check out Sidney Snoeck's photo essay on our country's rich and poor and the news that Couples for Christ divorced Gawad Kalinga. Good for GK, I'm definitely sure they are going to be better off and gain more international/local support if they remove religion from the picture and embrace a more secular tone to their mission of alleviating poverty.
Posted by carlosceldran at 1:55 PM