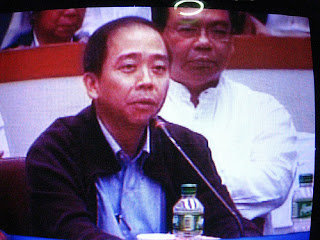 Oh my god. Can I just tell you? I don't care about ZTE and the Jun Lozada brouhaha. I don't care about it at all. I haven't even kept the TV on a local channel long enough to even pretend to care about Jun Lozada and Atienza and NBN and The First Gentleman et al. When I see anything about this ZTE issue on television, I just go "Eeek. Next channel!" and switch stations like my hand was going to burst into flames if I didn't. Not that I am diminishing the issue at all. Corruption is a big issue in a developing country like ours. But in this particular instance, it's just the hypocrisy and grandstanding of those who are doing the condemnation that just turns me off. And poor little Jun Lozada gets himself thrown in the middle. Poor shmuck.
I mean, yes, the First Gentleman is a little piglet. No doubt about that. But please don't tell me that all the politicians pursuing this issue aren't little piglets either (below). Getting little greasy slices of pork from projects like the NBN is modus operandi in ANY administration - it's no secret to us and it's no secret to the senators doing the grilling. It's been the modus operandi for decades! Where else would ANY administration get money to do things like, oh, give to senators and congressmen for their election campaigns? Senators and Congressmen don't come for free, ya know. Tip: instead of looking at the noisy ones, let's try and count who are the quiet ones in Senate and Congress. Perhaps they are quiet because they already were given their pieces of the pork. And it's only the squealing ones that are upset because they didn't get theirs. Hence, if it's all just piggies fighting piggies over pieces of pork that they just pass on to other piggies, then it's just politics in the end. Period. Philippine politics and governance is sick, that is as obvious as obvious can be. But will this Jun Lozada scandal be the catalyst for the great changes that need to be made? Ha! Great changes will be done in this society through small ways and on a person to person basis. Paradigm shifts don't happen through Senate hearings. Trust me, this "moral revolution" WILL NOT be televised.

Do I think corruption should be addressed? Yes. Do I think getting rid of Gloria will solve this issue? No. Do I agree with JDV that a moral revolution in government should be pursued? Yes. But will that revolution come from Senate and from Congress or from JDV himself. Hell no. Parehong baboy silang lahat. So that's why I'm ignoring the politics and protests. And judging by their sad rally last week (Please. Makati Business Club, Black and White Movement, Cory Aquino et al. More people attended the Beyonce concert than your rally), I think others are too.

Idea to float by the Senate: Start the moral revolution by commiting mass hara kiri. Zest-o juice drink with a dash of cyanide would be my cocktail of choice for you all. 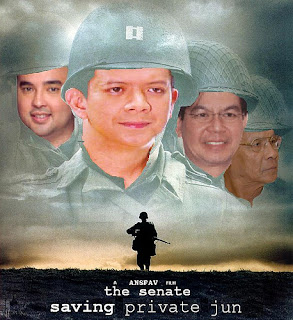 Anyone from ABS CBN out there who can tell me if the Lozada scandal is bringing up ratings? Thanks Krookroo for the pic of Lozada, ANSAV for the spoof on the senators above, and to my brother Miguel for helping me figure out why I just don't care.

And omigosh. John Marzan has the claws out for Bong Austero and me! Jeez. Why are all these anti Gloria people so hormonal? Peace, guys. Really.
Posted by carlosceldran at 10:08 PM