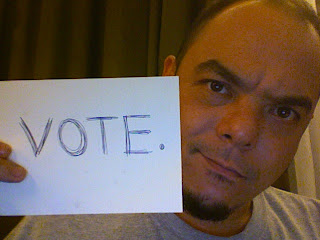 Let's start with 'WHAT IS A VOTE?'

A vote is a decision. It is first and foremost a privilege to exercise one's right to choose. And let it be said that since a democratic election is won by capturing the majority number of votes, it is, in essence, a RATIONAL DECISION.

We can vote for many different things. Yes or no. This party or that party. This person or that person. Voting is supposed to be all about rationality.

When voting for a presidential person you are voting for the POTENTIAL of that person to lead an entire country. We don't know yet if that person will be the greatest president ever or the worst, or if he/she will be a mediocre one. So a vote in a way is a gamble. You're placing your bet on somebody.

Presidential candidates are job applicants. They are vying for the highest, most powerful and also the most complicated job in the land. As presidentiables present themselves, they are opening themselves up to our judgment, our instincts, and our REASON. They are asking us, "Who do you think is potentially the most presidential among us?"

According to our constitution nearly anybody can be a PRESIDENTIABLE. But not everybody is truly PRESIDENTIAL.

And it GOES BOTH WAYS. If you look for certain qualities in a president, then YOU, as a voter, must have the QUALITIES OF A GOOD VOTER. You vote using your mind, your heart, and your love for your country. You vote upholding the sacred principles of democracy. You vote with reason and with passion. You vote because you want to take things to the next level, as every change of government should. And a good voter is one who CAN RECOGNIZE TRUE POTENTIAL IN OTHERS BECAUSE HE HAS SEEN THE TRUE POTENTIAL IN HIMSELF.

As a citizen of a democratic country YOU HAVE THE RIGHT TO FULFILL YOUR HIGHEST POTENTIAL, just as you have the privilege of helping others fulfill THEIR HIGHEST POTENTIAL. And yes, that includes the President. We are all in this together!

Take a step back and immerse yourself in the essence of a democracy and the sanctity of the vote. Quiet the noise and wipe away the mudslinging that mar most political campaigns. Think. Reflect. Ponder. Research. Ask questions. And hold in your mind the highest vision you can possibly have for your country, your president, and yourself.

And then... choose wisely.