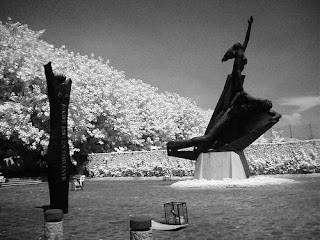 BARRIOS, BURGOS AT THE BANTAYOG NG MGA BAYANI
“Mrs. B” is a one-act play written by award-winning playwright Joi Barrios together with Rowena Festin and Grundy Constantino of the Concerned Artists of the Philippines (CAP). Conceptualized and directed by Soc Jose (of the TV series Darna), the play reveals the gamut of emotions Mrs. Edita Burgos has been going through in search of her missing son, Jonas. The play seeks to increase public awareness on the issue of enforced disappearances as well as raise funds to assist families of the missing in their quest for justice.

The monologue will be restaging in February 2010 at the Bantayog ng mga Bayani Auditorium in Quezon City. Veteran actresses/directors Gina Alajar and Bibeth Oreza will alternately play the role of Mrs. Edita Burgos in ten shows, including a Critics’ Night and a Media Night. A total of 1,000 tickets for the show will be sold to students and the general public. Proceeds of the play will be for the benefit of the Free Jonas Burgos Movement and Desaparecidos.

• Critics’ Night is scheduled on Feb 4, 6pm at Bantayog ng mga Bayani (above) with Gina Alajar as Mrs. B.

• All in Bantayog ng mga Bayani in QC.

• The play is in Filipino.

Thanks Rolando Tolentino for the picture above:
Posted by carlosceldran at 12:20 PM