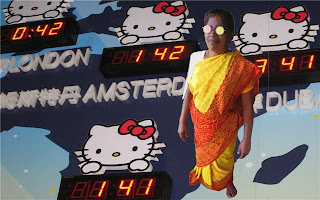 "Lost Cities" is a psycho-geographical, mixed-media narrative that explores pre and post apocalyptic urban landscapes and architectural backdrops through imaginary characters named "the sub-colonials" who move, dance, and tread through these past, futurist, and surreal environments. Collaborators in the project, that involves interactive computer-generated sound and video, are Chris Brown (Sound) and Johanna Poethig (Visuals) from Oakland, California; and Tad Ermitaño (Visuals), Caliph8 (Sound) and Malek Lopez (Sound) from Manila.
They will present their work-in-progress and discuss its artistic intentions and technical implementation with the audience.

THIS IS A FREE EVENT! Just bring Booze or a snack.
Presenting the Oakland-Manila Art Exchange:

Chris Brown, composer, pianist, and electronic musician, creates music for acoustic instruments with interactive electronics, for computer networks, and for improvising ensembles. He teaches electronic music and composition at Mills College in Oakland, where he is Co-Director of the Center for Contemporary Music (CCM).

Tad Ermitaño, media artist, writer and filmmaker. As far as the media art goes, he is interested in algorithmic/procedural editing and composition, new uses for the moving image and have been lately drifting into elementary robotics. His work "Quartet" was exhibited in the recently concluded International Symposium for Electronic Arts (ISEA) in Singapore.

Johanna Poethig, a visual, public and performance artist who has exhibited internationally and has been actively creating public art works, murals, paintings, sculpture and multimedia installations for over 20 years. Her paintings, sculpture and installations reflect her interest in satire, symbol, human nature, society and our consumerist culture. She has produced and participated in performance events that mix feminism, global politics, costume, props, cabaret, experimental music and video.

Malek Lopez, Berklee-trained virtuoso who is the principal composer for the band Drip, and half of the abrasive electronica duo Rubber Inc, who are responsible for establishing electronica in Manila. He is also a well-noted film composer.

Caliph8, beat smith, graffiti bomber and soothsayer. A lynch-pin of various groups and ensembles, he's probably the most sought after sound manipulator in the Philippines. His output extends to more than just sniffing aerosol paint and flexing wrists with fat markers–he also creates visuals and projects them while manipulating audio and creates sound collage.

Hosted by Living Room (Carlos Celdran) and SABAW Media Art Kitchen
Posted by carlosceldran at 10:54 AM