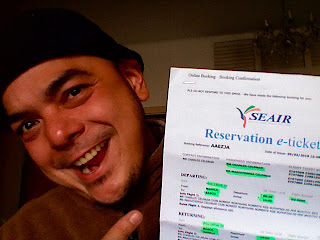 B-B-B-BATANES
I'm heading to BATANES tomorrow. Awesome. Never been. And I'm going with my eyes closed and my mind open. I don't even know where I am staying. But who cares, I'm taking a break from the craziness of Manila. Thank you SEAIR for the affordability of this trip.

Apparently - and according to SEAIR: "The Batanes group of islands at the northernmost tip of the Philippines has a distinct landscape unlike any other in the country. During the winter months from December to February, temperatures can go as low as 7 degrees Celsius. The cool temperate weather, combined with green pastures, windmills on rolling hills and lighthouses guarding immaculate shorelines, give visitors a sense of a holiday in the countryside of Europe." Really now? Ows? A few weeks back, someone told me that Batanes is the only Philippine province to have seasons. This I got to check out for myself.

But back to the airline and my shameless plug about them: SEAIR or Southeast Asian Airlines, will be extending their Batanes Winter promo for booking until February 28, 2010. (This is the ticket I'm getting). Going to Batanes ain't as cheap their rates to Boracay, but it's still a good deal for the chance to visit a place as supposedly otherworldly and ethereal as Batanes. Around Php5,800 ish either way. But you'll get a 10% discount if you book it via www.FlySeair.com. This is the promotion which is only good until February 28, 2010. To see current Batanes rates: type ilovebataneswinter09 in the promo code field when you use the FLIGHT SEARCH column under the "BOOK NOW" header on www.FlySeair.com

Incidentally and while we were on the topic of Boracay, SEAIR also offers special morning rates of AS LOW AS PhP 1,999.20 per way all-in when you book/travel from February 1, 2010 and onwards. The special rates are available for limited seats for all flights to and from BORACAY before 7 a.m. I know, insanely early, YES. But that's why it's CHEAP! And think about it. More time to spend on Boracay.

So that's it and once again, log onto www.FlySeair.com or call SEAIR reservations at 8490100.

Oh, and finally, SEAIR also has a Facebook Fan Page.

Join 'em for updates on promos like this one.

Posted by carlosceldran at 2:07 PM